Dad's ashes were put to rest last Friday, and on Saturday there was a lovely memorial service. Interim Pastor of St. Andrew's Presbyterian Church, Jody LeFort, did a wonderful job with words of comfort and healing. We appreciated her care for my father, and for my mother.


My son, Thomas, has on occasion asked me why I tease him so much. After some reflection, I was able to answer the question. I learned from the master.

Many here knew my father as a kind, compassionate, creative person. All these things are true. But it is also true that my father had a wonderful sense of humor, an odd sense of humor. When I think of my father, this is the first thing I think of.

My earliest memory of Dad and his sense of humor was when Lora, Chuckie and I were very young–probably before we started school. My mother recited the old poem about “Wee Willie Winkie” to try to get us kids settled into bed quickly.

Wee Willie Winkie runs through the town,
Up stairs and down stairs in his night-gown,
Tapping at the window, crying at the lock,
"Are the children in their bed, for it's now ten o'clock?"

"Hey, Willie Winkie, are you coming in?
The cat is singing purring sounds to the sleeping hen,
The dog's spread out on the floor, and doesn't give a cheep,
But here's a wakeful little boy who will not fall asleep!"

Anything but sleep, you rogue! glowering like the moon,
Rattling in an iron jug with an iron spoon,
Rumbling, tumbling round about, crowing like a cock,
Shrieking like I don't know what, waking sleeping folk.

Weary is the mother who has a dusty child,
A small short little child, who can't run on his own,
Who always has a battle with sleep before he'll close an eye
But a kiss from his rosy lips gives strength anew to me.

I understand that Dad engaged in this kind of play with others as well. One of my favorite stories is from when he was much younger, and living at home with his parents on the West Side of Cleveland. There was a man who moved into the neighborhood, and this man had long hair. No big deal today, but in the 50's it wasn’t all too common. His sister Sandy asked him why that man had long hair. My father told her that it was because he was posing for Jesus pictures.

Once we were traveling through Montana. Dad got pulled over for speeding. Never having witnessed law enforcement officials ever dealing with my father over any kind of incident, I was worried. I didn’t know what was happening. When my dad got back into the car after his conversation with the State Troopers, he told me he was going to be arrested–but quickly changed the story when he saw how upset I was.

It wasn’t until I was a teenager that Dad perfected his teasing ways. We were in Virginia, visiting Aunt Sandy, when we went to do some shopping. Much to my dismay, Dad was wearing a shirt which kind of looked like an Ohio State jersey, plaid shorts, and worst of all, he was wearing tube socks with big red stripes and tennis shoes. This ensemble was unacceptable to me, and I was really, really embarrassed to go out into public with him dressed this way. I expressed this in my own teenage angst kind of way, and made some comment about being embarrassed. My father’s response was not to tone down the tourist outfit, but to stop in the sidewalk and do an equally embarrassing little dance that the whole world could see. And he made sure that everyone there knew who he was with, too.

There are many other tales–including practical jokes which I won’t repeat here today.

Dad's sense of humor wasn't just teasing, though. He was also a master of using humor to lighten a situation, or to make someone feel better. When I was in kindergarten or first grade, I was diagnosed with a lazy eye. I would have to wear glasses and have a patch over one of my eyes. Dad drew an eye on the patch I would wear. A few weeks ago, when Thomas and I were visiting him in the hospital, we returned that favor, drawing a cat's mouth and nose and whiskers on the masks we had to wear while visiting him.

Mom and Dad had a wonderful marriage, which had a lot of laughter and adventure. Together, they modeled for us kids how to make it through the perils of the world, how to hold things together even when things got rough.

And for Mom and Dad both, things would get rough. Both had their bouts with cancer, one right after the other. They lost their daughter, Lora, far too soon. But together, they weathered those storms, and displayed a strength I will always admire. 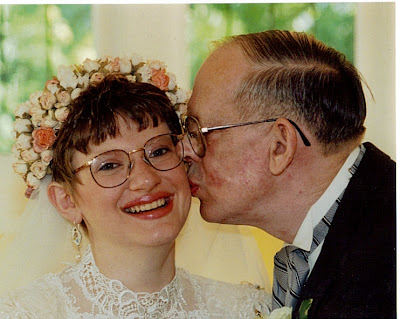 Wonderful husband. Wonderful Dad. Talented artist. Empowering teacher. Devoted brother. Loyal friend. Unwavering fan of OSU and the Cleveland Indians. Sort of liked the Browns. Not interested in NBA all too much.

I loved him, and I will miss him.

My Song of the Day

I've been in Cleveland visiting my parents. Dad had heart valve replacement surgery--but also is recovering from pneumonia, a stapf infection, and an ulcer. He's got a long way to go. If you think of it, please pray for him.
# posted by Sara @ 8:33:00 PM 0 comments

I'm a Browns fan. So whatever is going on at some stadium somewhere tonight matters not to me.

For reasons I will explain in another post, I spent this past week in bee-yoo-teh-full Cleveland, Ohio. My son and I flew back Saturday, and James came to pick us up Sunday morning. I knew the Superwhatever was today, but was in no mood to see the Pats and the Giants. What I was in the mood for was U2.

God has used U2 in my life for 23 years. When I heard that there was going to be a 3D movie of a U2 concert, I was thrilled. I had the opportunity, thanks to my husband and son, to go and see it at an Imax theater today in Dallas. It was money and time well spent.

I've never been able to see U2 live--now I feel as though I have. Fabulous! If you are near a theater showing the film, you must go. Must. From the opening "Vertigo," to the finale "Yahweh," I was captivated, and even moved to tears in places.

It is coming to Wichita Falls in a couple of weeks, and our church is taking a group. Did I mention that our church is awesome like that? You can check to see where it is playing near you here.
# posted by Sara @ 8:33:00 PM 0 comments