A lot of blogs I read have been talking about Stephen Colbert. I love his show, "The Colbert Report."

I also love that Colbert is a practicing Catholic.

I tend to prefer Colbert to Jon Stewart. He really seems to know what he is talking about, and he is much more even-handed in his satirical criticism.

See the below clips, and enjoy!

My On Notice Board for the Week 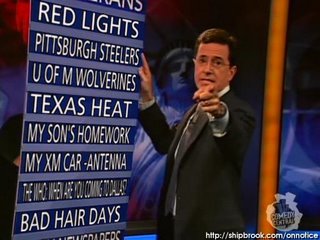 More on the Forced Conversion Tape

After watching this video, hubby just asked me would I be able to say this under this same circumstance? I don't think I could.

But then again, Peter thought he couldn't either.

On Islam and Christianity

Sherry on Bittersweet linked to this article by Mark Steyn which has given me a great deal of food for thought today.

"Christians and Muslims are both 'people of the book.' But there’s a difference: Christianity started out as a religion of the weak, held by the lowliest in society and advanced by conversion and example, independent of the state. A distinction between religion and temporal power is embedded in its founding narratives.

"Compare the final words of Jesus to his disciples, on the day of his ascension … “Ye shall receive power, after that the Holy Ghost is come upon you: and ye shall be witnesses unto me both in Jerusalem, and in all Judaea, and in Samaria, and unto the uttermost part of the earth.”

… with the final words of Mohammed to his disciples: “I was ordered to fight all men until they say, ‘There is no god but Allah.’”

I found it ironic that Centanni and Wiig were forced to convert by gunpoint, and at the same time forced by gunpoint to say that there is no facism evident in the Islamic faith.

I struggle. I have respect for people of most every faith. I am not a strong-armed proselytizer. I don't mock other faiths, if for no other reason than because I so often fail at living my faith out.

Yet, I tend to agree with Steyn that if one of the key components of the Islamic faith is to "fight all men until they say, 'There is no god but Allah,'" then Islam is a weak faith. There is an "Achilles Heel" that is leading a good portion of the Islamic world to believe in a true theocracy--not the so-called theocracy that many on the left claim that Christians in this country want. If forcing people to convert under coercion is part of the battle cry, then are the converts ever truly converted?

Will there ever come a day when one of these rogue nations gets ahold of a nuclear warhead, aims it at our country, and threatens to annhilate one of our major cities unless our leaders "convert" to Islam? I am not an alarmist. I am not a conspiracy theorist. But I do think that it is possible. Especially when you remember that something Osama said following 9/11 was “I was ordered to fight the people until they say there is no god but Allah, and his prophet Mohammed.”

How, then, as Christians, do we respond to people of the Islamic faith? I am open to suggestions, and as the gears turn in my mind, will post more on the topic.

What I've Been Thinking About Today

When I heard about this early Sunday morning, I knew this was a forced conversion...

While I Ponder Deeper Things to Blog...

OK, so it wasn't 24 for me all weekend, but there were two 24 experiences I had over the weekend.

First, C Span aired a fun program on American Perspectives called "'24' and America's Image in Fighting Terrorism.'" The Heritage Foundation hosted this event which was emceed by Rush Limbaugh, and included the producers, writers, and some cast members of 24 and some homeland security experts. You can watch this almost two hour panel discussion here. Justice Clarence Thomas and his wife were in the crowd.

Second, 24 rocked the emmys. Woohoo! Not that I care if Hollywood validates my television choices. I was actually shocked it won. It's themes are not very PC.

I'm a procrastinator by nature. Lord have mercy upon me. I am a day late, but decided to play the RevGal Friday five anyway.

2. Who was a favorite teacher in your early education?
I loved all my teachers. Mrs. Krukmeyer, my kindergarten teacher, encouraged my reading. Mrs. Dolan encouraged my creativity. Mrs. Short was kind and gentle. Mrs. Eaton was another one to really encourage my reading. And Mrs. Vitez remains someone I see from time to time. She even came to visit my first parish!

3. What do you remember about school “back then” that is different from what you know about schools now?
I think my son had earlier reading requirements than we did. Although I was already a reader by kindergarten, others did not have to be able to read as much as Thomas was required to read by the end of kindergarten. I also think they started math earlier. Now that I think of it, they also had full-day kindergarten, whereas we only had a partial day.

4. Did you have to memorize in school? If so, share a poem or song you learned.
"We hold these thruths to be self-evident. That all men are created equal. That they are endowed by their Creator with certain unalienable rights. That among these are life, liberty, and the pursuit of happiness." I know that's not the whole thing, but that's the part I had to memorize for a play. Turns out those words help to form my love for our country.

5. Did you ever get in trouble at school? Were there any embarrassing moments you can share?
Of course! I got in trouble tons.

Once we were passing around a Pringles can with an object in it. We were only supposed to feel it and guess what it was. I pulled it out, and exclaimed triumphantly, "It's an orange!" I ruined the whole lesson.

Mostly, I got in trouble for yakking. No shock there. My son has the same issue.

This is from a comedy sketch show. Quite amusing. Hat tip to The Corner at National Review Online.

On our recent trip to Ohio, we visited a brand new Jewish museum called the Maltz Museum. They had a special exhibit, which included some fascinating artifacts, titled "The Cradle of Christianity." This is the first time the Jerusalem Museum has lent these objects to a museum in the United States, I believe. Here is some of what we saw. 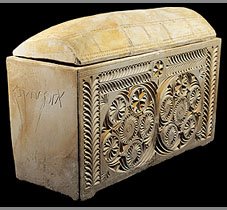 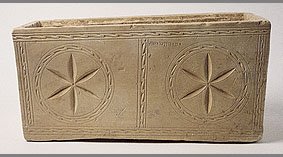 Some ossuaries, the one on the left is believed to be the ossuary of Caiaphas. 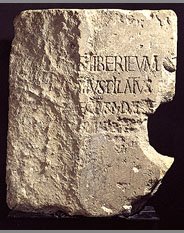 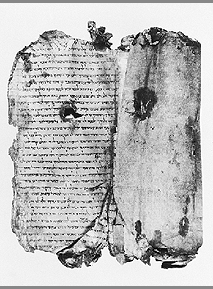 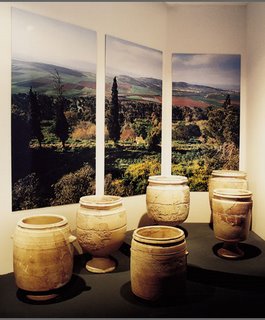 The miracle of water turning into wine, which Jesus performed at the Wedding at Cana, would have taken place in jars like this.

1. Describe the last play or musical you saw. (At least provide the what, when, where, and why). What was your opinion of it?

The last play we went to see was called Physics for Poets. It was about a college professor, who is working on a Ph.D. proposal on William Blake, and finds herself struggling with questions about her life. It was a reading in Quanah, Texas. We saw it because a friend was reading the lead role, and because I love William Blake. It was enjoyable--and quite the accurate look inside the world of academia.

The last musical we saw was Peter Pan starring Cathy Rigby (her farewell tour). We saw it in Dallas as part of the Dallas Summer Musicals. It was, of course, as wonderful as could be. A great first exposure to musical theater for my son.

All time favorite play: You Can't Take it With You I love the lunacy.

All time favorite musical: It's a toss-up between The Music Man and Oklahoma.

3. “The Producers,” “The Philadelphia Story,” “Hairspray,” “The Wedding Singer”…all were movies before they were musicals (okay “The Philadelphia Story” was a play and then a movie, and they changed its name when it became a musical, but whatever). What non-musical movie do you think should next get the musical treatment?

Ohhhhh, don't forget Spamalot! A few years ago, I would have chosen The Holy Grail, but they did that. How about The Godfather? It has potential. But it could also turn out really poorly.

4. Favorite song from a musical? Why?
This one is a little obscure. One Night in Bangkok from Chess. It has a good beat, and I like to dance to it.

5. The most recent trend in Broadway musical revues is to construct a show around the oeuvre of a particular super-group or composer, where existing songs are woven together with some kind of through story. The most successful of these (“Jersey Boys” (The Four Seasons), “Mamma Mia” (ABBA), “Movin’ Out” (Billy Joel)) have made a mint, but many (“All Shook Up” (Elvis), “Hot Feet” (Earth, Wind and Fire)) have bombed. What great pop/rock singer/composer or super-group should be the next to be featured, and what might the story-line be for such a show?

Meatloaf would be perfect. His songs are already overdramatic, and there is a lot of storyline built in. High School romance could be a plot line. Maybe have the principle characters grow up, come back to their reunion for some of the newer stuff. It would probably be one of the worst productions ever.

Bonus question for singer/actors. Favorite part you’ve ever played/sung.
My favorite role was the most recent. This was not in a well-known play, but a quick dinner-theater production the community players we are a part of did last fall in our town. I played Trixie LaRue, a call girl with a heart of gold, in a play called Don't Print That. It was set in the late 1800's, and I had a horrible costume--a purple and black number that looks like the dancing girl outfits you can wear when you get an "old west" picture taken at tourist traps. It was fun for me to play, and I think fun for the congregation to see me in this role. Got called "Trixie" for a while after that.

On the Road Again...

Updating on the road is difficult, so I am several days behind, here.

Yes, we are on the road again, this time driving from the Lone Star State to the Buckeye State.

Our first big adventure occurred in Oklahoma when we blew the rear passenger tire. Fortunately, we were just about 12 miles away from civilization. After hubby put the spare on, we drove to a Sam's Club and were able to purchase a new tire. Still, it put us behind about a half a day. We drove on through Oklahoma, enjoying lunch in Tulsa, and finally coming to a halt in Springfield, Missouri.

In Springfield, we discovered a restaurant that couldn't be healthy. Culver's makes something called "butterburgers," and also fresh custard. I indulged in both, and thought about flogging myself for said indulgence. Delicious!

More tomorrow on traveling through Missouri, Illinois, Indiana, and Kentucky.